Cooperstown Mayor Jeff Katz called the indoor tennis courts "a great idea on multiple levels."  There isn't a lot to do in Cooperstown in the winter, but it's clear the community will make use of athletic opportunities if they are offered.  The heavy use of the Clark Sports Center is a case in point, he said.

But as mayor, Katz is also looking at the proposal from a  fiscal standpoint.  Many people travel to other places, like Oneonta, Utica, or the Albany area for winter tennis.  While there, they may take advantage of shopping or dining opportunities.  "if we could capture some of that for our community, and bring people into our community, it hits a lot of buttons," he said. 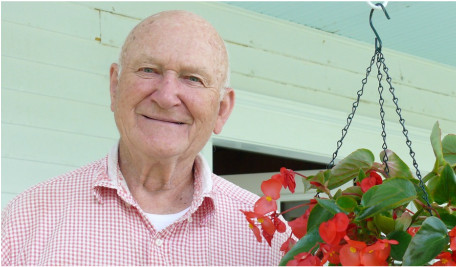 Almost 40 years ago, Emery Herman considered putting a tennis court for his five children on land just below his home in Cooperstown.  When he learned that building a second one would cost just 30 percent more, he decided to do it, and to open the courts up to the community for free.

"I thought it was something the family would enjoy and the community would profit by," he said.  He was right.  For all these years, local residents have used the courts for as long as the weather would allow, and Herman, now 85, still play there too.  "There's hardly a sunny day from April to late October when it's not in use," he said.  "I have had fun, relaxation, made friends, and hopefully kept in a little better shape."

His wife, Nancy, also plays, though less than Emery.  "We have a women's league back in the early 1980s, and the most surprising number of people signed up," she said.  Even now, pro uses it to teach lessons there regularly, she said.  Nancy said she thinks a year-round venue could be successful.  "Ive always liked hitting a ball, and tennis was the way I enjoyed that for many years," she said.  "it's a good game."